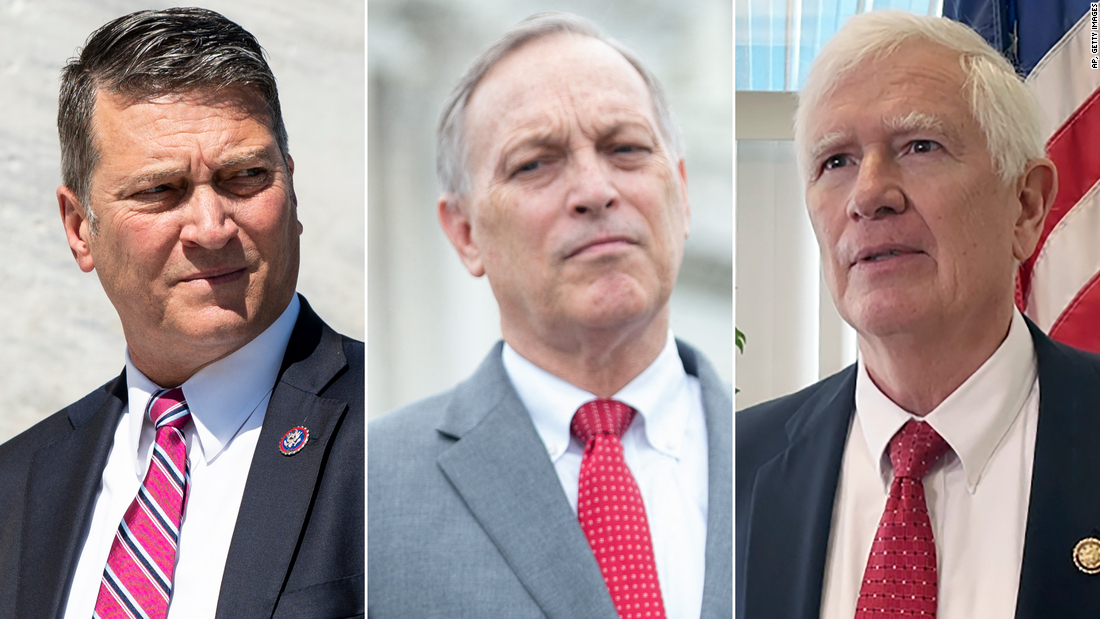 The three GOP lawmakers who received letters are: Reps. Andy Biggs of Arizona, Mo Brooks of Alabama and Ronny Jackson of Texas. The committee has previously sent letters to House Minority Leader Kevin McCarthy, a California Republican, as well as Reps. Scott Perry of Pennsylvania and Jim Jordan of Ohio.

“The Select Committee has learned that several of our colleagues have information relevant to our investigation into the facts, circumstances, and causes of January 6th. As we work to provide answers to the American people about that day, we consider it a patriotic duty for all witnesses to cooperate,” Chairman Rep. Bennie Thompson, a Democrat from Mississippi, and Vice Chairwoman Rep. Liz Cheney, a Republican from Wyoming, said in a statement.

The committee said it is seeking information from members who “participated in meetings at the White House and had direct conversations with President Trump leading up to and during the attack on the Capitol.”

The panel is also seeking information from those “who were involved in the planning and coordination of rallies on and before January 6th.”

“We urge our colleagues to join the hundreds of individuals who have shared information with the Select Committee to get to the bottom of what happened on January 6th,” Thompson and Cheney said in the statement.

In response to the committee’s request, Jackson made clear he will not cooperate with the ongoing probe.

“I will not participate in the illegitimate Committee’s ruthless crusade against President Trump and his allies,” he said in a statement obtained by CNN.

Biggs also said in a statement that he would not cooperate with the committee. Biggs criticized the panel, saying, “Its purpose is to destroy President Trump and his supporters, intimidate members of Congress, and distract Americans from real issues that are destroying this country.”

In its letter to Biggs, the committee writes that it is “aware of your participation in certain planning meetings, both in person at the White House and remotely, regarding various aspects of planning for January 6th.”

The panel refers to a White House meeting on December 21, 2020, where Biggs and other members of the House Freedom Caucus were in attendance.

“Testimony received by the Select Committee suggests that the discussion that day (and in subsequent meetings) addressed, among other things, a plan that Vice President Pence, as the presiding officer of the joint session on January 6th, would unilaterally refuse to count certain states’ certified electoral votes,” the letter reads.

It also notes the recent opinion by a federal judge in California which said it is “more likely than not” that former President Donald Trump committed a crime.

The letter goes on to say that the committee wants to understand “precisely” what Biggs knew before the violence on January 6, 2021, “about the purposes, planning, and expectations for the march on the Capitol.”

The committee notes that rally organizer Ali Alexander has said publicly that he, Biggs and other Freedom Caucus members discussed the idea of bringing protesters to Washington, DC, for January 6.

The letter then notes that it is in possession of communications between Biggs and former White House chief of staff Mark Meadows that raise questions about “your efforts to persuade state legislators and officials that the 2020 election was stolen and/or to seek assistance from those individuals in President Trump’s efforts to overturn the election.”

Lastly, the committee says that “recent information from former White House personnel has identified an effort by certain House Republicans after January 6th to seek a presidential pardon for activities taken in connection with President Trump’s efforts to overturn the results of the 2020 presidential election.”

“Your name was identified as a potential participant in that effort,” the letter reads.

The committee is reaching out to Brooks after he recently revealed that Trump had repeatedly asked him to work to rescind the 2020 election, and remove Joe Biden from office.

“The exchange you have disclosed with the former President is directly relevant to the subject of our inquiry, and it appears to provide additional evidence of President Trump’s intent to restore himself to power through unlawful means” the panel writes.

The panel also wants to speak to Jackson about his connections with the Oath Keepers, after text messages revealed that the group was trying to protect him while he was at the Capitol on January 6. Members of the group, including its leader Steward Rhodes have been charged with seditious conspiracy. Jackson was also at the rally on the Ellipse on January 6 that preceded the riot at the Capitol.

Another message from an Oath Keeper revealed that Jackson had “critical data to protect.”

The committee writes in its letter to Jackson that the text messages “raise several specific questions” that they want answered.

This story has been updated with additional developments Monday.